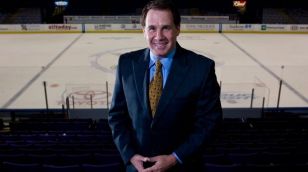 John Kelly is returning for his 10th year as the television play-by-play announcer for the St. Louis Blues.He graduated from SIUe in 1983 with a bachelor’s degree in Mass Communications – Television & Radio and is returning for a chat.

He has called NHL games for over 20 seasons and comes from a hockey broadcasting family which includes his father, Dan, his brother Dan Jr., and his uncle Hal. Kelly also has broadcast experiences in baseball, basketball, and soccer. Kelly and his wife, Jennifer have three children.