The documentary Sanctuary has won the 2016 Fusion Doc Challenge at the Slamdance Film Festival.

The film  by directors Ashley Seering, and Cory Byers profiles an abandoned church that was given a second chance.

Cory Byers is an Instructor in the Department of Mass Communications, the Director of Video Services, the faculty advisor for the Advertising Club, and an award-winning video producer. Ashley Seering is a 2014 SIUE graduate and an alumnus of the SIUE Mass Communications program.

While Sanctuary took top prize, Seeking Shelter by James Goldberg was given an honorable mention. The short flick looks at the current system in place to deal with Los Angeles stray dog population and the people who are fighting to improve the system. 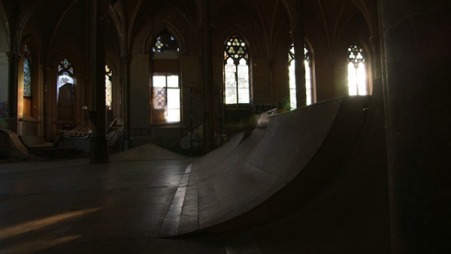 Filmmakers had five days to produce their short films from start to finish. They could choose when to take those days to make their film between August and November.

The finalists also get to attend the Los Angeles premiere at the Audience Awards Film Festival on Friday, April 7 at the El Portal Theatre.

Tune into our next post where we will have an Q & A session with the Cory Beyers on his film and what’s next for “Sanctuary”.