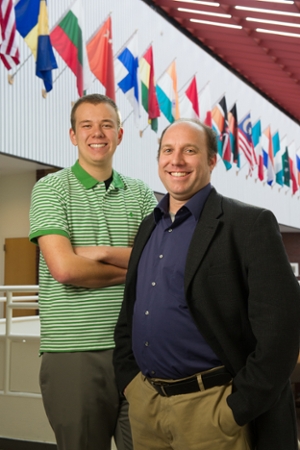 Mass Comm sophomore James Moss is making a Nigerian screenwriter’s dream a reality. A film critic hopeful, Moss is using globally available resources to produce the man’s screenplay and learn the production side of filmmaking.

Moss, a native of Belleville, is pursuing degrees in mass communications and applied communication studies from SIUe. The international undertaking is the work of his URCA (Undergraduate Research and Creative Activities) assistantship under Mark Poepsel, PhD, assistant professor of mass communications. It serves as a lesson in entrepreneurial media in a constantly evolving discipline.

“It’s not just as simple as you go and get a job at a newspaper anymore,” Moss said. “This project is broadening my perspective and opening my eyes to the many ways my professional career can go after graduation.”

The short-film, Get Up, Get Out, is a public service announcement of sorts, denouncing armchair activism and raising awareness of the devastating effects of pollution.

“The screen writer is from Nigeria, and we have agreements, pending funding, with a videographer from the United Kingdom and a motion graphics editor from the United States,” explained Moss. “The film shows two buildings with tweets coming from the people inside. These people are all talk, proclaiming the evils of pollution without doing anything about it. As they have a conversation via social media, a cloud of pollutants slowly creeps up on them.”

While the premise of the film is something both Moss and Poepsel find significant and impactful, it’s the global management piece of the project that Poepsel proposes will be advantageous to the future of mass communications.

“I want my students to be thinking about where media are going to be in 10 years,” Poepsel said. “I want them not only to get a job post graduation, but also to be building a career for the future. That means thinking more entrepreneurially and more about the future of social media and multiple media skills being involved in their every day work.

“Through his URCA assistantship, James’ academic career has been accelerated. He’s being exposed to research as a sophomore and is much farther in his learning.”

Poepsel refers to this innovative project as a proof-of-concept that may produce academic components for future entrepreneurial media courses or capstones.

“In our field, given the state of mass media, if you’re not thinking about practical applications for your theory, you’re doing a disservice to students and to society,” he explained. “We’re in a time where we’ve got to figure out this new economy, and start writing about what works and what doesn’t.”

Moss and Poepsel intend to complete the short film project by the end of the spring semester. The production will be funded through an Indiegogo campaign.

Originally posted in the SIUe Newsletter