(Above) Courtesy of The Alestle / Photographs by: Brian Munoz

” My Journey from Granite City to the White House”

Veteran White House Correspondent Peter Maer shared memories of “My Journey from Granite City to the White House.” Maer retired from CBS News in January after nearly 40 years on the presidential beat. The SIUE alum described how his Granite City roots guided his reporting. Maer also offered his opinions on the ongoing media and information revolution that will have a profound impact on the 2016 presidential campaign.

The Alestle‘s Madison O’Brien was able to attend the event and wrote the following feature for the Alestle:

Reflecting back on the past 40 years of his career, Peter Maer said there was nothing at all he would change. An SIUE alumnus, Maer retired from CBS in January, leaving behind his title as a White House correspondent.

On Thursday, Nov. 12, Maer revisited his past when he came to campus to discuss his experiences as a broadcast journalist covering the presidential beat. A Granite City native, Maer said he was glad to be back in the place where it all began.

“Coming here was a chance to talk about the influence of this university and what my hometown meant to me, the education I received and how I pegged all the stories I did on what people back home would think,” Maer said. “I spoke to 26 million people a week and never saw their reactions, but tonight people laughed at some of the stuff I said; it was nice to get a response.”

The veteran White House correspondent shared with the audience some of his most outrageous moments while working with presidents ranging from the reign of Jimmy Carter to the present-day Barrack Obama administration.

According to Maer, a lot of hard work and many great influences helped him reach the pinnacle of his career at the White House.

“Norm Greenberg, who was the manager of WIBB radio, gave me a lot of breaks and experiences that I would have otherwise not had,” Maer said. “I was also influenced by many of my other bosses and, of course, the teachers who I had here.”

Maer said the start-up of his career at the White House was merely a lucky break.

“I was covering Jimmy Carter when he was the governor of Georgia, and a company found me while working in Atlanta and wanted someone who was familiar with him,” Maer said. “So much of what happens in life is a matter of luck and timing.”

The best part of being in broadcast journalism, according to Maer, was the wonderful people he had the chance to work with.

“Meeting not only presidents, but also everyday people, was the best part of my career,” Maer said. “Talking to voters and seeing what motivates them, seeing people who make the process work, meeting military veterans who were war heroes that were so humble and having the opportunity to see places that I otherwise would not have ever been able to see made the job so great.”

Although Maer said he had the chance to encounter many great experiences throughout his journey, his job was not always ideal.

“There were a lot of long hours and lots of travel pressure. Trying to balance those things with my personal life was the hardest part about my job,” Maer said. “I’ve been blessed to have been married for 43 years, and we found a way to make it work. I wouldn’t change a thing.”

Maer said it is crucial to set goals and do everything you can, step-by-step, to get to where you want to be in life.

Being in the first class of mass communications graduates at SIUE, Maer said this campus gave him many opportunities.

“To see the development of this school is very exciting and to talk to so many mass communications students is very gratifying to me,” Maer said. “It gives me faith in the generation that is coming up.”

“ [Maer] had lots of great stories, and I thought he spoke truthfully about his experiences,” Henderson said. “ He also spread a good message about media literacy and where we are going as far as politics in this country.”

According to Henderson, his favorite part of listening to Maer was hearing about his encounters and funny antidotes about politicians.

Not only did Henderson marvel at Maer’s experiences with many presidents, but he was also inspired as well.

“In my future, I want to be able to inspire people moving forward just like [Maer] did,” Henderson said. “I hope to inform young minds and inspire kids to reach for the fullest potential.”

Sophomore psychology major Sydney Meyer, of Jacksonville, said she enjoyed the speech and can tell Maer is a man a lot of people respect.

“[Maer] is a very successful man, and it is very inspiring that someone from such a small town can be so successful,” Meyer said.

According to Meyer, from Maer’s discussion she learned to be flexible with her future career, work hard and build good connections while leaving a memorable impression on those you work with.

“I want to be someone that everyone will speak highly of, like the community does about him [Maer]. Walking around, I can overhear people saying he’s such an amazing guy, and all these people really respect him,” Meyer said. “He was very humble and seems to inspire everyone as a local hero.”

Maer is a five-time recipient of the Merriman Smith Award for presidential coverage under deadline pressure. He has also been recognized with other honors, including the Edward R. Murrow Award. He twice served as commencement speaker at SIUE and treasures his Honorary Doctorate of Humane Letters from his alma mater. – SIUe Arts & Issues 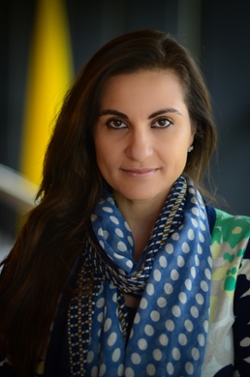 With the current presidential campaigns of female candidates Hillary Clinton and Carly Fiorina in the U.S., and the 20th anniversary of the Women’s Conference in Bejing, Southern Illinois University Edwardsville’s Dr. Elza Ibroscheva’s pioneering research on gender representation in media and politics is particularly timely.

Ibroscheva is chair of the Department of Mass Communications in the SIUE College of Arts and Sciences (CAS) and recipient of the William and Margaret Going Endowed Professorship Award. As part of her award, she presented, “If Women Ruled the World: Reflection on the Intersection of Women, Politics and Media from around the Globe”.

“My research presentation offers an overview of the challenges female politicians around the world experience as they pursue political careers,” Ibroscheva said. “It will highlight their achievements, as well as innovative media strategies in breaking the mold of understanding politics as intrinsically a male domain.

“This is not an attempt for me to shine some sort of heavy feminist critique upon the political discourse, but it is an opportunity for me to call for an honest debate about how we understand that world of politics,” she added. – CAS

Focused primarily on trends from a “global south” perspective, Ibroscheva’s research has widened the geographic reach of scholarship on the topic. Through her receipt of the award, Ibroscheva has also concentrated on an under-explored area of research – social media and female politicians.

“We are poised to experience a dynamic shift in gender balance,” said Ibroscheva. “The public at large may be interested in how this shift impacts our understanding of the crucial role women play in politics as voters, but more importantly, as viable political candidates.

“My ultimate goal is to start a conversation about the status quo of politics around the world,” she continued. “We need to acknowledge and shine a light on the challenges and obstacles that are often created by the narratives and journalistic norms that guide the media coverage of female politicians.” – CAS